"The city of rivers", called Arrabona at Roman times, has been an Episcopal See for almost 1,000 years, where Napoleon won a battle in 1809. Its atmospheric inner city and delightful baroque buildings make it into a cherished and famous university and industrial city.

The ancient kernel of the city is the Káptalan Hill where three rivers - the Danube, the Rába and the Rábca - join together. The residence of the bishops of Győr, Püspökvár (Káptalan domb 5/a.), can be recognised from a long distance by its broken tower.
Cím: 9021 Győr, Káptalandomb 1.

Its oldest building is the house tower dating from the 13th century and the Gothic Dóczy Chapel, (Dóczy-kápolna) (Püspökvár) built in the 15th century.

The ancient Roman predecessor of the Episcopal Cathedral (Martinovics tér) was erected as early as 1030, and later was extended by the Saint Laszlo Chapel (Héderváry Chapel),

built to hold Saint Laszlo's Herma,  made of gilded silver and representing the pinnacle of medieval Hungarian goldsmith's art, produced on the occasion of King Laszlo I's (1077-95) canonisation. The two ?black altars" are distinctive adornments of the church; and its frescos were painted by A. F. Maulbertsch: the rococo frame of his devotional painting depicting the Virgin Mary and the Infant is a masterpiece. The two beautiful baroque art works in the proximity of the church were made in 1731: the statue of Saint Michael (Martinovics tér), sculptured as an archangel, and the Monument of the Ark of the Covenant (Gutenberg tér).

In the building of the seminary (Káptalan domb 26.), the Diocesan Collection, Treasury and Library holds the masterpieces of 1,000 years of ecclesiastical art. Its most precious pieces are the ivory triptych, the monstrance dating from the 16th century, another monstrance from the 18th century, and the Zichy Collection consisting of liturgical objects. The Library boasts the largest codex in Hungary. The works of the greatest sculptor in 20th-century Hungarian sculpture, Miklós Borsos (1906-93), can be seen in the museum bearing his name (Apor Vilmos püspök tere 2.). 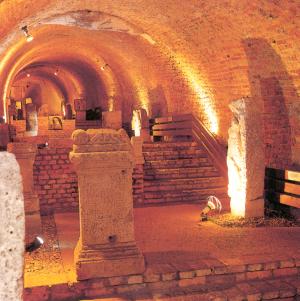 In the stone of the castle vaults (Bécsi kapu tér 5.) the sights of interest include sepulchres from the ancient Roman and modern ages, the Kreszta House (Rózsa Ferenc u. 1) Kovács Margit Állandó Kerámia Kiállítás, a typical classicist building, and the ceramics exhibition in its attic showcasing Margit Kovács's (1902-77) charming figurines.

The figure on the ornamental well in Duna-kapu tér is the symbol of the city: the Iron Rooster commemorates the occupation of the castle in 1594 by the Turks. The castle was later destroyed by Napoleon. The famous listed buildings in Széchenyi tér serve as the scenery for the baroque wedding organised during the events of the Győr Summer. 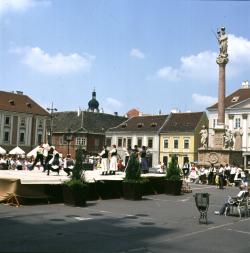 The iron trunk house (4) accommodates the 20th-century works of art and the applied art works from Africa and Oceania of the Imre Patkó Collection.

The trunk, standing at the corner of the house, with nails driven in it, used to be the sign of a 19th-century grocery shop.

The Apatúr House (5), once the residence of the abbot, is a splendid baroque palace, and now houses the János Xantus with its magnificent exhibitions on the history of the city, medical history and applied arts, besides a postal stamp exhibition.

Three significant buildings of the Benedictine order can also be found in the square: the interior of Saint Ignatius Loyola Church was constructed to recall the Il Gesú Church in Rome. Its most precious decorative element is the pulpit. 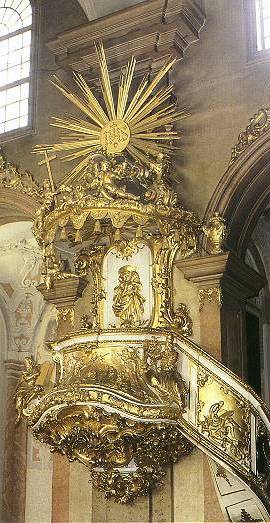 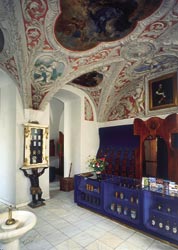 The Benedictine Grammar School (8) has presented Hungarian culture with several notabilities. A walk in the city offers sights such as the 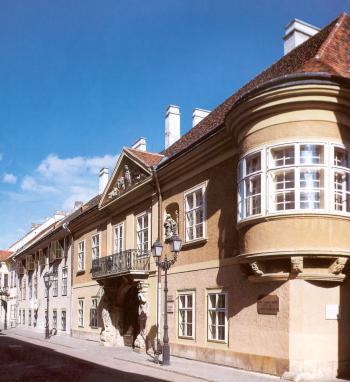 Zichy Palace (Liszt Ferenc utca 20.) - a venue for weddings and concerts -, the old city hall (Rákóczi u. 1.) with its wrought-iron ornaments, the impressive neobaroque building of the new city hall 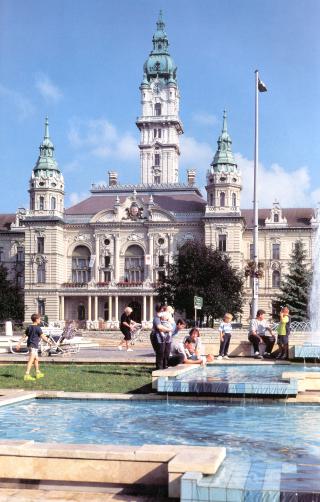 (Városház tér), the ?Hungarian Ispita" (spital) with its courtyard adorned by Tuscan columns, and the richly embellished, closed balcony of the Rozália House (Kazinczy u. 21.), typical of the city. The collection of the City Museum (Városi Múzeum, Rákóczi u. 5.) presents ancient Greek and Roman ornaments, renaissance and baroque furniture, sculptures and paintings, and Chinese porcelains, besides exhibitions where pieces of contemporary graphical art, Miklós Borsos' sculptures and Margit Kovács's ceramics are displayed. The "Hab Mária" sculpture, dating from the 18th century and situated in the 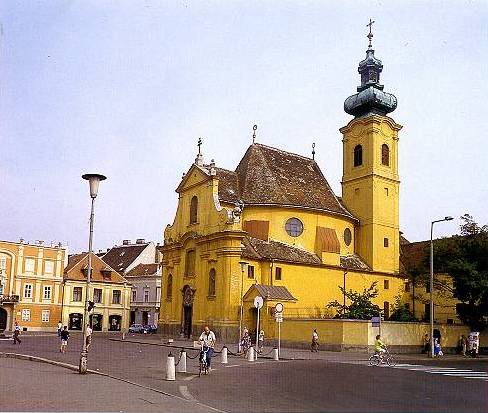 Carmelite church (Bécsi kapu tér), is one of the most beautiful Hungarian sculptures. Concerts staged in its courtyard. There is a collection abounding in the works of 20th-century Hungarian painting in the City Gallery (Városi Képtár, Király u. 17.), which is housed in the Esterházy Palace. 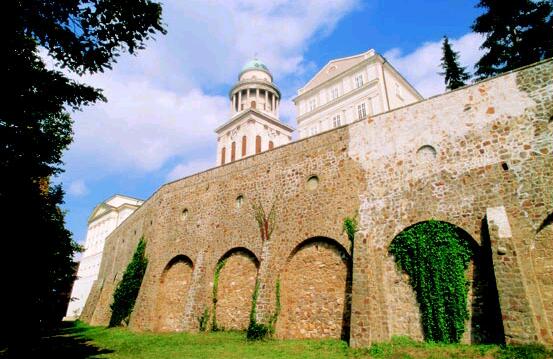 "The most ancient Hungarian house" and a treasure-trove of the history of Hungarian architecture, the a bencés főapátság, has been standing for 1,000 years on Saint Martin's Hill, referred to as "Pannonia's Holy Hill" in medieval times. It is listed by the UNESCO, and was visited by Pope John Paul II on the 1,000th anniversary of its establishment.

There is a great number of monuments of inestimable value: the gothic, lierne-vaulted sanctuary, chapel and crypt, consecrated in 1001, of the 13th-century basilica; the monastery with the country's only medieval cloister that remained intact; the marvellous renaissance carvings of the ?porta speciosa" made of red marble; the library, which is among the largest Benedictine libraries in the world with its 360,000 volumes; the archives, where Tihany Abbey's deed of foundation, the first written record of the Hungarian language, is kept; as well as scientific and art collections. The picture gallery of the Pannonhalma Abbey (Vár 1.) hosts temporary exhibitions from time to time, and the rich collection of coins includes some Roman coins as well. Preserving traditions, the members of the Benedictine order still act as teachers: there is both a grammar school and a boarding school working in the monastery. Opposite to the entrance of the monastery, the protected abbey arboretum (Vár 1.) can be found, part of which is the park of the abbey, and the other part is a forest park with splendid walkways. The Millennium Monument was erected on the 1,000th anniversary of the Hungarian conquest, 100 years ago.